The History of Pine River, MN

was originally established as a logging and fur trading community. Native American people canoed the lakes and streams of the area and famous explorers plied the present day stream named Norway Brook and the Pine River, which both flow through our community and the nearby townships.

George Barclay was the founder of the City of Pine River and the main street through the city, Barclay Avenue, is named after him. Mr. Barclay operated Barclay’s Trading Post alongside what is now Highway 371. His business supplied a large area with the foods needed to exist in the north woods. Mr. Barclay was shot and killed in a now non-existent hotel in Pine River in the late 1800s and the murderer was never apprehended. It is a piece of Pine River history that many do not know.

Pine River owes much of it’s history to the pine, particularly the white pine. The pine forests stretching across the state from the shores of the “big sea water” to the plains of the “American Desert” contained thousands of square miles of the finest timber east of the Pacific Northwest. 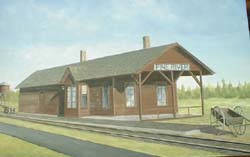 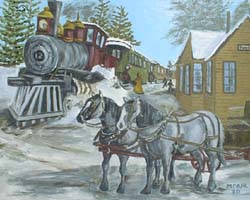 from the “Logsleds to Snowmobiles”

Found near the center of this mammoth forest preserve …

located in the giant forest-fertile crescent formed by the headwaters of the Mississippi River and flowing through many termed “the richest stand of timber in the Old Northwest,” is a river memorialized by early explorers as “The Pine”.

And at the place where it’s two major tributaries, the South Fork and Norway Brook, merge to form this majestic stream a peppery Scotsman founded a trading post in 1873, then a ranch followed by a hotel. Later cam a railroad, then a town – and finally a prosperous city.

Within two years after the Northern Pacific Railway had bridged the Mississippi River at “The Crossing” (Now Brainerd), George Angus Barclay established the first permanent trading post on the Pine River. From this site grew the village, which eventually took the name of the river and became “Pine River”.

This page is dedicated to all those who love history, as we do.

History from some of our friends.


My family is from Pine River. I am the grandaughter of Herman and Clara Weiss and Florence and George Prigge. My Papa Weiss owned the Shoe Shop across from the Red Owl in town until my uncle Richard took it over and then sold the property. My roots are in this town. I started my education at Pine River with Principal Rinke and his daughter was in my class. My uncle owns property where the river meets the lake and those are very cherished memories. Both of my grandfathers are gone now, but I still remember Pine River as my homestead. I am now a nurse and cry alot with the dying, wishing I was back where I grew up on the quiet shores when life was carefree. Memories and history hold me there happily. Keep it beautiful!
Amber Harris (Prigge)

My grandparents lived and died in Pine River. I truly think of it as their little piece in heaven and, I think they did as well. I remember visiting for summers and how relaxing and fun it was to be in the North Woods. To me Pine River will always hold wonderful memories of summer and family fun.
Marylynn Corry Fitgerald


Added History: My Father came to Pine River in early 1900s with his Mother {Olava} and his stepfather Nels Larson and a brother and sister. My father’s name was Adolf S. Nopson { Otto }.They lived there for many years. He met my Mother there { Hilda O. Haugen } they both worked in the saw mills. They took the train to Walker on Dec. 25th 1917 to get married. Nels and Olava lived there the rest of their lives, and raised many more children.
Tully Nopson